Wednesday, July 24th, Canadian singer-songwriter Loreena McKennitt, with a new album released in May entitled Lost Souls (Quinlan Road, 2018), returned to Italy with a summer tour, which made a stop in Macerata in the beautiful setting of the Sferisterio .
Loreena Mckennitt is recognized as an icon of Celtic music: she has also sold more than 14 million copies during her career. 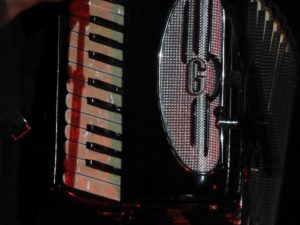 Twenty minutes before the concert, as soon as I entered the arena, I saw an accordion on stage and a spy lit up in my heart and from there so many questions: it had a small shape and a particular coat of arms the thing … I was very intrigued.
After a search and with the help of Rodolfo Spadari and his brother Franco, we were able to reconstruct this beautiful story that began many years ago, precisely in 1914.
The small accordion played by Mckennitt should, in all likelihood, be a loose low-back Giulietti built between the 50s and 60s, a very particular instrument both in form and of course also in sound. 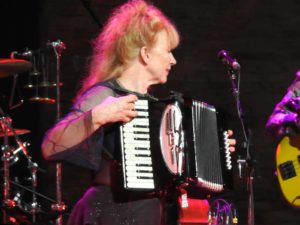 The history of Giulietti mostly embraces the whole development story of the fidardense accordion industry. Luigi Giulietti was born in Recanati and he emigrated to the United States-Chicago-in 1914 after a long and fruitful experience in the world of accordion at Soprani. In 1923 he founded Giulietti Accordions Co. in New York. His management would have continued from his son Julio to his father’s death in 1950.

With the sales boom, Giulietti stimulated the creation of a more convenient production center in Italy by financing the first investments. In 1945, Zerosette was founded by seven partners, which over the years has become one of the largest accordion companies known in the world. Giulietti in 1947 transferred the production of accordions from Serenelli to Zerosette. Given the sharp decline in sales between 1965 and 1970 in 1968 Spadari Giuseppe, brother of Adolfo Spadari, one of the seven partners of Zerosette, moved to Toronto to understand if there were the requirements to open a company with about twenty people directly overseas. 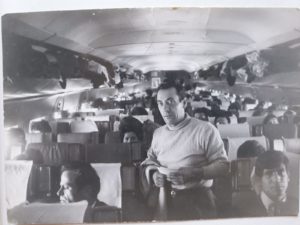 He stayed in Canada between Toronto and Montreal for two years working and adjusting Giulietti accordions, a brand that was still the most popular in Canada after so many years.
The production of the Giulietti accordion continues today in the Zerosette di Castelfidardo company.
Our entire history is born from an accordion, every family of Castelfidardo, some more or less, has to do with their own accordion company.
This interesting story, born by chance during a Celtic music concert, gives a sense of how many daring and courageous people in the past have left everything to emigrate to the other side of the world in a foreign country completely different from ours, to search through the accordion, a new hope of rebirth.
Today we should take as an example these pioneers to understand, deep down, the importance of our roots and to be able to reawaken in our hearts the spark of creativity and courage that will allow us to relaunch this exceptional and unique musical instrument.